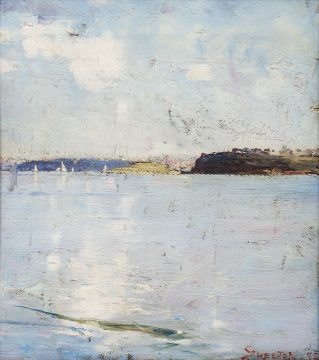 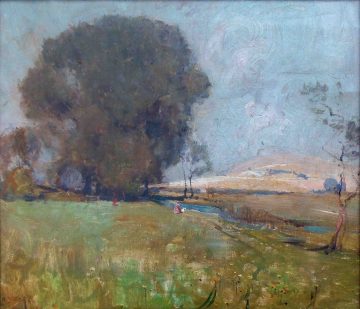 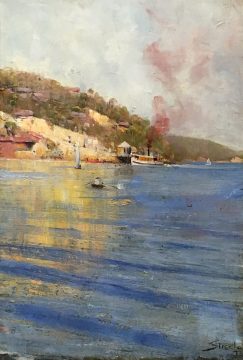 Panoramic View of Sydney Harbour and the City Skyline 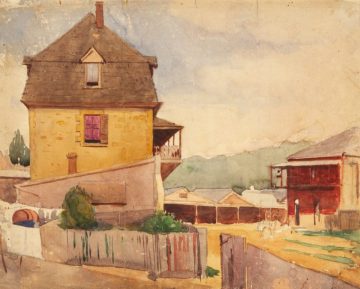 Bequeathed to Elizabeth Menhennitts (nee Norman) who bequeathed the panel to her husband Mr Justice Menhennitts, a well known collector. On loan to the McClelland Gallery, Frankston, Victoria.

Mr Justice Menhennitts bequeathed the panel to his brothers in law, Warwick and Phillip Norman, sons of the original owner. 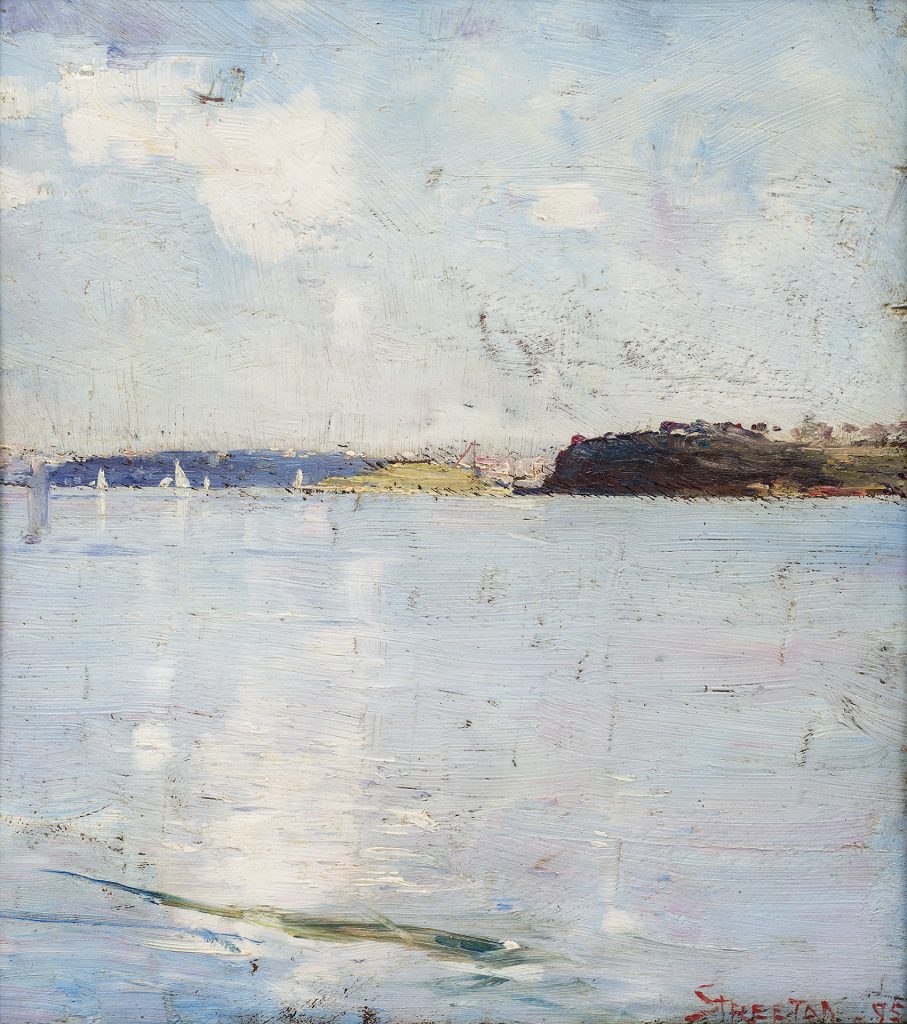 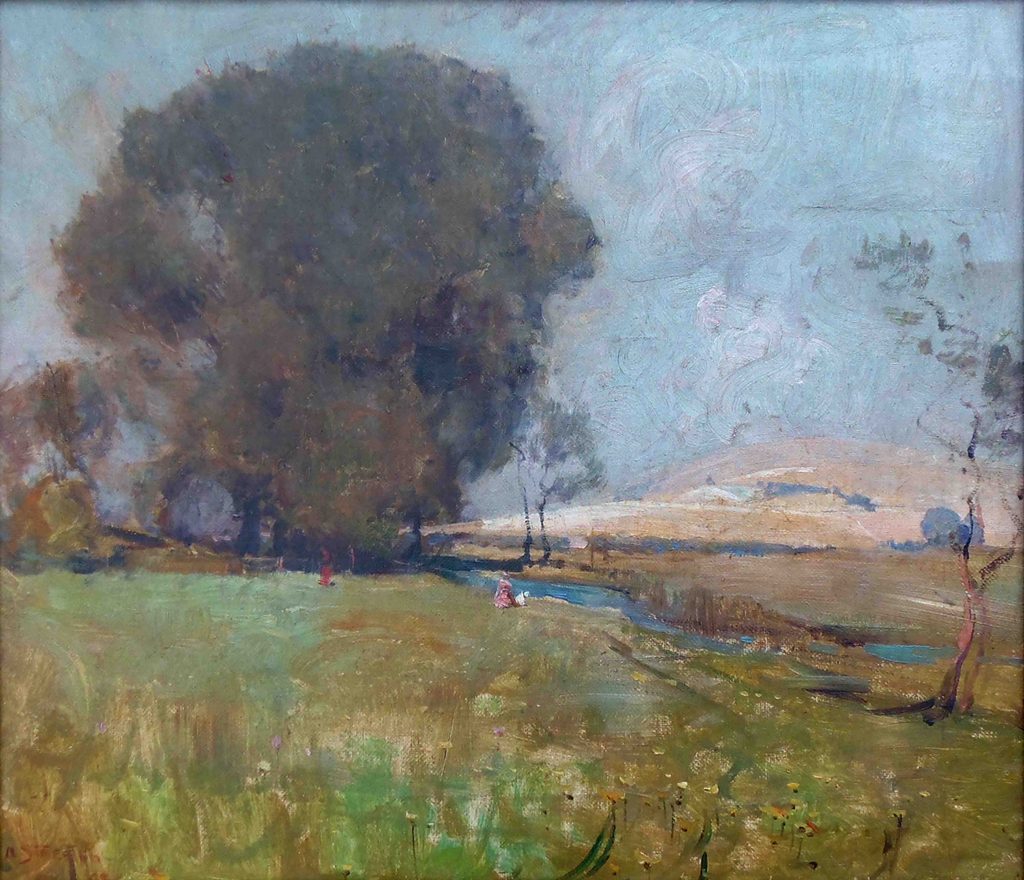 
“Streeton was living in London in 1898 but evidence suggests that he painted Australian scenes while there. In a letter to Tom Roberts dated 22 June 1899 he refers to a painting called Australian Recollections, ‘painted here during the long winter to cheer me a bit’”. 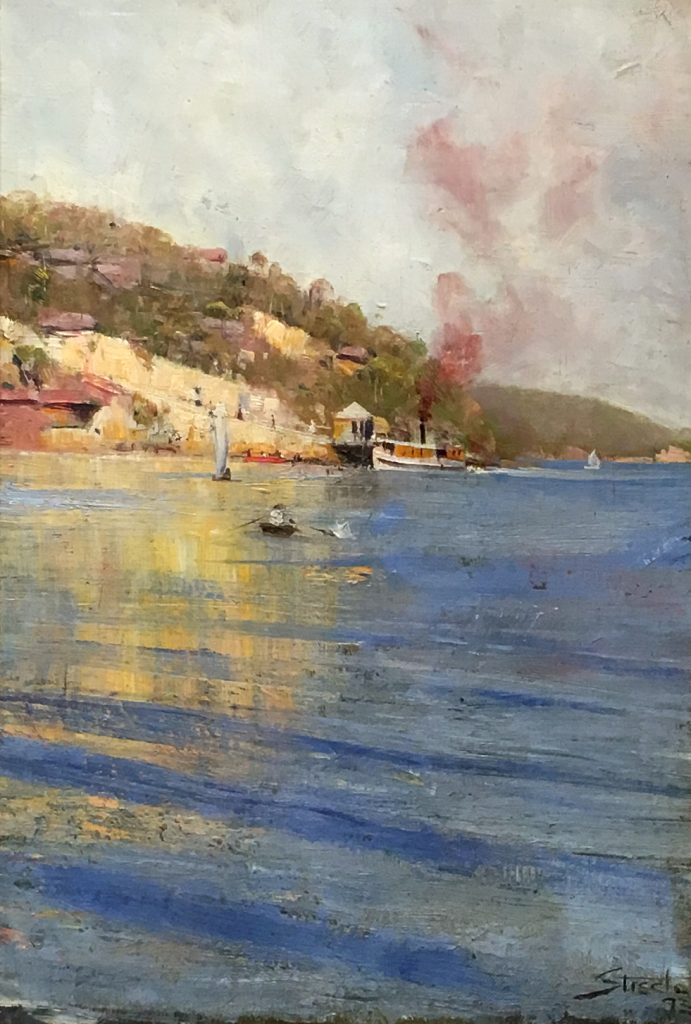 Golden Summers: Heidelberg and Beyond, National Gallery of Victoria, 1985


“This is Streeton at his best, painted long before any slickness or professionalism entered into his style. It’s typical ‘blue and gold’, with the deep expanse of water reflecting the sandstone cliffs of Sydney Harbour. The purple and mauve smoke, emanating from the ferry’s funnel, disperses to nothing in the hot summer sky. The impression has been captured before the moment fades.”

Panoramic View of Sydney Harbour and the City Skyline

Panoramic View of Sydney Harbour and the City Skyline1894


The painting was a gift from Emily Cecilia Bowden-Smith to her husband Rear-Admiral Nathaniel Bowden-Smith, Commander in Chief of the Australian fleet 1892-1894, as a souvenir of their 2-year post in Sydney before returning to the UK. They lived on the harbour at Admiralty House. 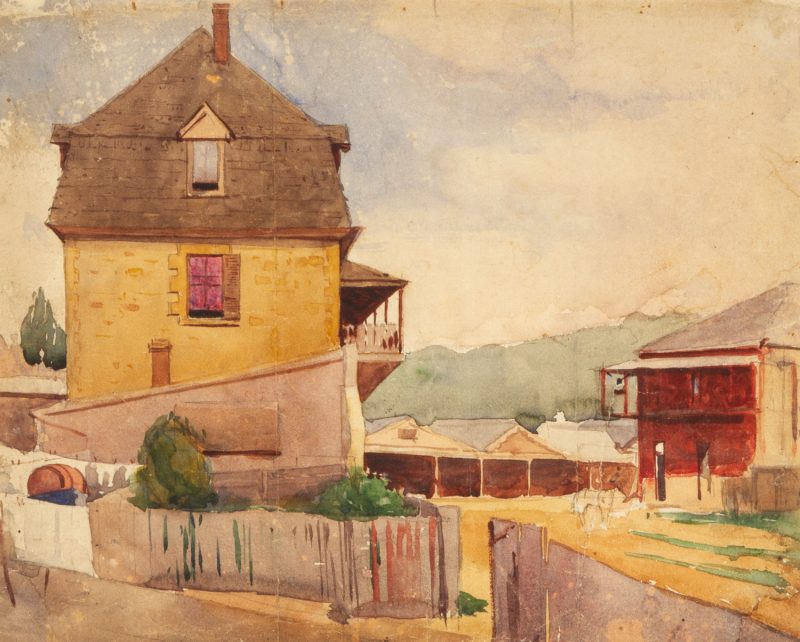 the verso with a pencilled inscription signed by the artist, accompanied by several small sketches that relate to its dedicatee (see below)


The pencilled inscription on the reverse reads:

‘To Fred Draper (the olde bird) as a slight unfinished memento of his friend, & trusting that he will be good & play plucky to the last. [signed] Arthur Streeton‘; immediately beneath this is a sketch of a billiard cue and cue rest, with a further inscription: ‘In off the red and cannon, play your own game “old burd” – Ha Ha!‘, followed by other sketches including music notation, a smoking pipe, a schnapps bottle and shot glasses, and a publican’s handbell; at the foot is written: ‘… mince or cold meat? Steak please‘.

This watercolour would have been painted during one of Streeton’s visits to Mittagong, in the New South Wales Southern Highlands, most likely in 1892. It is dominated by a side view of the original Commercial Hotel, an impressive double-storey building with distinctive brick work and high roof. The hotel was built by its proprietor, Fred Draper, senior, and when it opened in 1875 it became one of the town’s principal landmarks. The building was demolished in 1927.

Based on the wording, content and humour in Streeton’s dedication on the back of the painting, it seems reasonable to speculate that Streeton stayed at the Commercial Hotel on at least one of his visits to Mittagong, and that he struck up an informal friendship with Fred Draper. Draper was an engaging and popular figure who also served as a town councillor. We can imagine the artist and the publican playing billiards and drinking together in the convivial atmosphere of this country pub, renowned for its hospitality. When Streeton presented Draper with this beautiful watercolour of his own hotel, perhaps it was even in lieu of payment for his accommodation?

In 1892 Streeton painted the large watercolour The Vale of Mittagong, now in the NGV collection. Streeton wrote from Mittagong to his friend Tom Roberts at the time:

‘Have been 4 or 5 days on a picture from the summit of a huge precipice called the Gib (Gibraltar). This picture I wish to make chiefly remarkable for its delicate colouring, and to that end have climbed the aforesaid rock (400 or 550 feet up) 5 times and down again, after a walk of 1 3/4 miles from the township. However have done my best, and have, I think already made the picture, much my best commencement for a picture in watercolour paints. Mittagong is beautifully surrounded by high and rocky hills. There are about 4 or 5 public houses, a blacksmith’s shop, store, etc. etc.‘ (Christopher Wray. Arthur Streeton : painter of light, p. 71)

Two watercolours, both dated 1890 and with the same title Study at Mittagong, are recorded as numbers 108 and 109 in The Arthur Streeton Catalogue (1935), where they are described as “lost”.

The date of the present watercolour most certainly has a terminus ante quem, since Draper took his own life in May 1893, after suffering from chronic nephritis for a lengthy period. (Indeed, it is possible that Streeton’s use of the phrase ‘plucky to the last’ alludes to the fact that Draper was expecting to die from his acutely painful condition, for which there would have been no treatment or cure). The following report on the death of Fred Draper, senior, appeared in the Bowral Free Press and Berrima District Intelligencer, 20 May 1893:

‘A Sad End. DEATH OF ALDERMAN DRAPER OF MITTAGONG THROUGH STRYCHNINE POISONING. We briefly alluded in our last to the death of Alderman Draper of Mittagong after a lengthened illness. For many months his health had been giving way, and several months ago he took to his bed, suffering from Brights’ disease, heart disease, and general dropsy. He gradually got worse, the pains increased, sleep failed him, until between 10 and 11 o’clock on Tuesday morning, while in a fit of temporary insanity, he took a dose of strychnine, and so ended his life a few minutes afterwards. His age was 56 years. By his death a prominent figure in the history of Mittagong has been removed. He was truly a man of the world – shrewd and full of energy. He would.succeed where many would fail. He was highly respected by many. He had a spirit of enterprise, and the faculty for succeeding. He leaves a widow and grown-up family. The funeral on Wednesday afternoon was largely attended….‘

An inquest found that ‘the deceased had died from strychnine poising, self administered, during a fit of temporary insanity.’