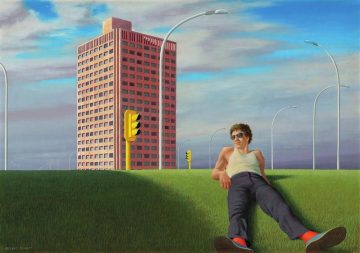 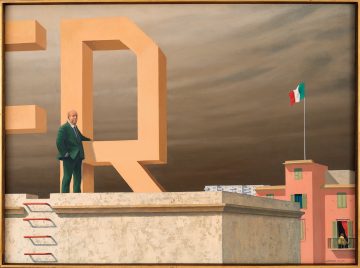 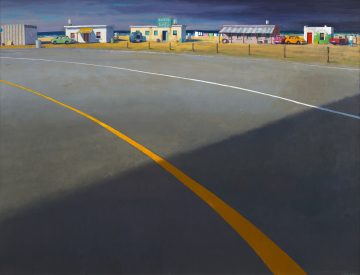 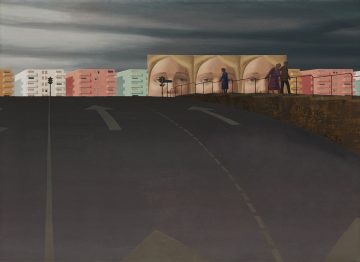 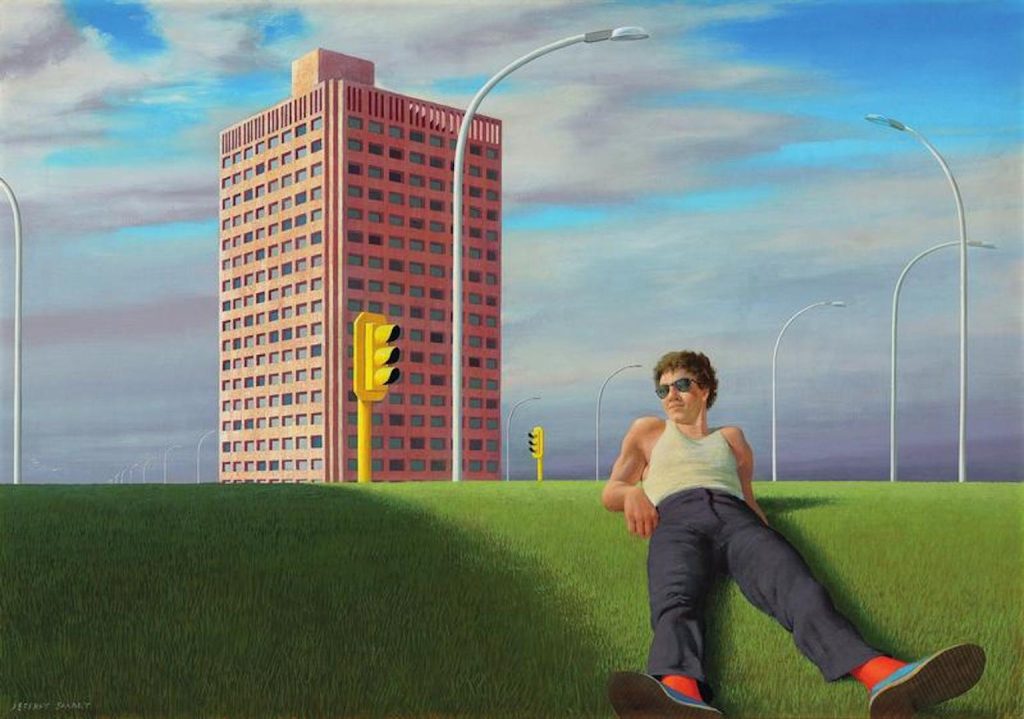 
This is one of the artist’s most important works from a seminal period in his oeuvre.

In 1968, Jeffrey Smart noted that, “I find myself moved by man in his new violent environment. I want to paint this explicitly and beautifully.”[1] His paintings of this period were wonderfully ominous, such as his iconic work Cahill Expressway (1962, NGV). Grey, smog-ladened skies surrounding brooding buildings, oftentimes dwarfing a lone figure, all meticulously articulated.

Ten years later, however, and his work had progressed to a level of optimism and levity, no ‘violence’ in sight– undoubtedly influenced by the meeting of his life-long partner, Ermes De Zan. When Smart collected De Zan from the duomo in the Tuscan town of Borgo San Sepolcro on June 13, 1975 (after meeting at Justin O’Brien’s home in Rome in 1973), it was the beginning, he wrote, “of the happiest time in my life”. North Sydney, painted in 1978, with its youthful palette of buoyant blues, soft pinks, luminous yellows and lush greens oozes this joy. It is no coincidence, then, that De Zan is the figure depicted.

One of Australia’s most collectable and influential artists, Smart instructed us that today’s modern world is beautiful, if you know how to look at it. Decaying concrete, rows of streetlights, banks of windows, urban trucks – all can be mesmerising. James Gleeson once described Smart’s paintings as, ‘too real to be real’,[2] with a sense of design that could only be described as ‘off-beat classical’[3]. His works have been called ‘surreal’, but Smart always contended that it is the world of today that is surreal, not his depictions of it. As a committed realist and classicist, subscribing to a credo of aesthetic formalism through rationality and static equilibrium, Smart, paradoxically, seems to always direct our attention towards the abstract qualities of his paintings, such as colour, rhythm, line, balance and scale. All of this is wonderfully toyed with in North Sydney. He plays with scale, manipulating the viewer’s perception – all playfully skewed but seemingly possible.

Living with De Zan in his Tuscan villa from 1975 onwards, one can see the well-known influences from the works of Piero della Francesca, whose frescoes were in churches throughout the towns surrounding them. Not only in his mathematical precision but also the luminous light which bathed his subjects, both human and architectural. As his friend David Malouf wrote, he presented the man-made objects of today with “Piero’s supernatural glow”. In North Sydney, Smart basks the sunlit De Zan in this glow, as well as compositionally – with the delicately executed street lights all shining onto him metaphorically and physically. The pink building, also draped in sunlight, is known to be the Bayer building on Alfred St, North Sydney – the home of ‘Australia’s most prominent sign’.[4] With talk of the building being demolished in the near future, the painting’s historical importance is noteworthy.

Smart’s skill as a draughtsman, honed and demonstrated in his numerous studies and sketches for every painting, enabled his mastery of the smallest detail. This serves to imbue his paintings with an impressive technical power and yet an illusion of simplicity. It is the imaginative perception of the everyday world – ‘nature seen through a temperament’ as he puts it – which is the oeuvre of his work.

Equally, the power of Smart’s figures results from the care with which he constructed the stage upon which they appear. Even where stasis rather than action is the ostensible subject of the painting, such as in North Sydney, the sense of drama or presence remains. The subtle and masterful patterning of the composition explores the relationship of man and his constructs. Individual elements in a made-world, distant and planned, shining light on a moment of unplanned leisure. Take away the sitter’s red socks, or even soften their bold hue, and the figure no longer ‘pops’. It is this care that Smart exhibits across all aspects of his paintings, wonderfully executed in North Sydney, that partly explains the powerful immediacy of his work.

Ermes has said: “[Smart] tried to get away with saying, ‘Oh, it is just a composition, the figure is there for a scale.’ I think the figure was also there as a poetic trigger to a certain mood in the painting. It had to be there.”[5] In North Sydney, De Zan’s reclining stance is also a beautiful nod to the work of Henry Moore, whom Smart often talked about as being a great influence.

Alongside an early confidence in the handling of architectural form and in the placing of the human figure, Smart also showed an effective boldness in exploiting visually an empty and seemingly distance-less expanse of foreground. The lower half of North Sydney is delicately articulated grass, a detailed yet undifferentiated area that both invite us in and yet, within the frame, forms a barrier across the picture surface. He loved a cascading and disappearing horizon line – the horizon as edge of a plane – giving a simultaneous sense of eternity and imminent curiosity as to what was beyond view.

Jeffrey Smart always worked toward a ‘stillness’ in his paintings, saying many times that he believed it was the ‘fundamental aesthetic principle’ for which he was aiming, best summarised in T.S. Eliot’s lines:

…Only by the form, the pattern,

Can words or music reach

The stillness, as a Chinese jar still

Moves perpetually in its stillness[6]

This ‘stillness’ comes from the perfection of design, not in the landscape depicted. Such principles as the Golden Ratio were key elements to his most successful works, and North Sydney is one such example. It is interesting to note that many of his works, whilst encapsulating this idea of ‘stillness’ in motion, were often filled with images of travel; the airport, roads, bridges, shipping containers. North Sydney is notable for a depicted stillness. Perhaps Jeffrey Smart, in this period of ‘profound happiness’, felt he had ‘arrived’. 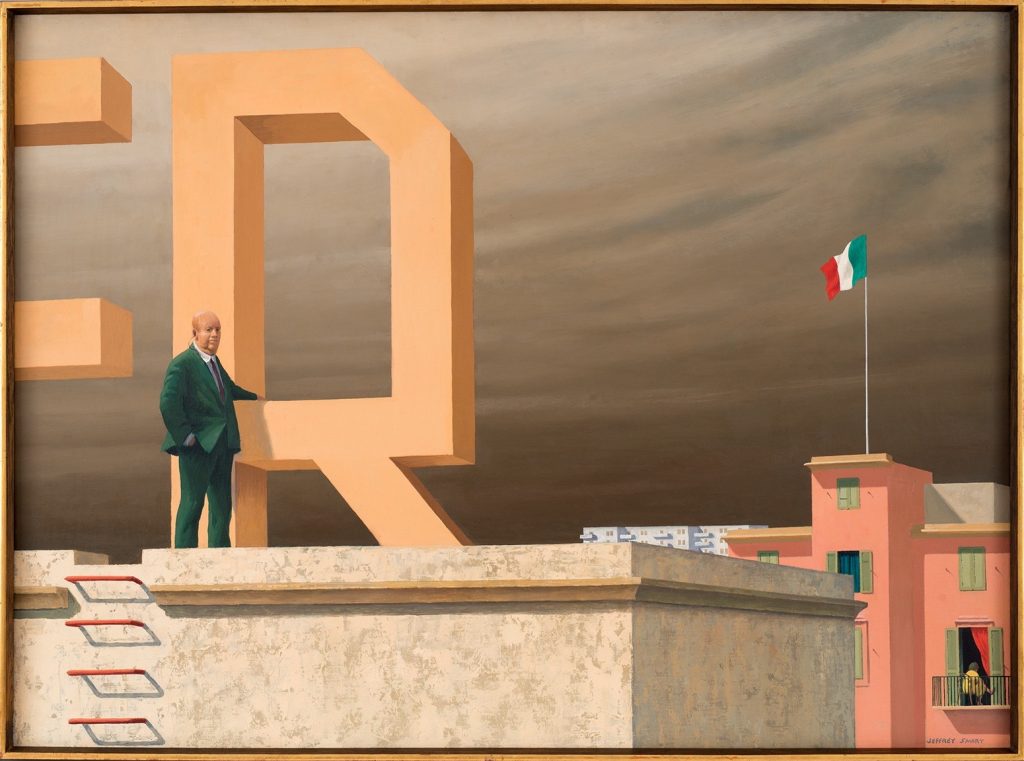 “The Summer Exhibition of Paintings, Drawings and Sculpture”, The Leicester Galleries, London, August 6 – September 6, 1970, Cat. No. 39 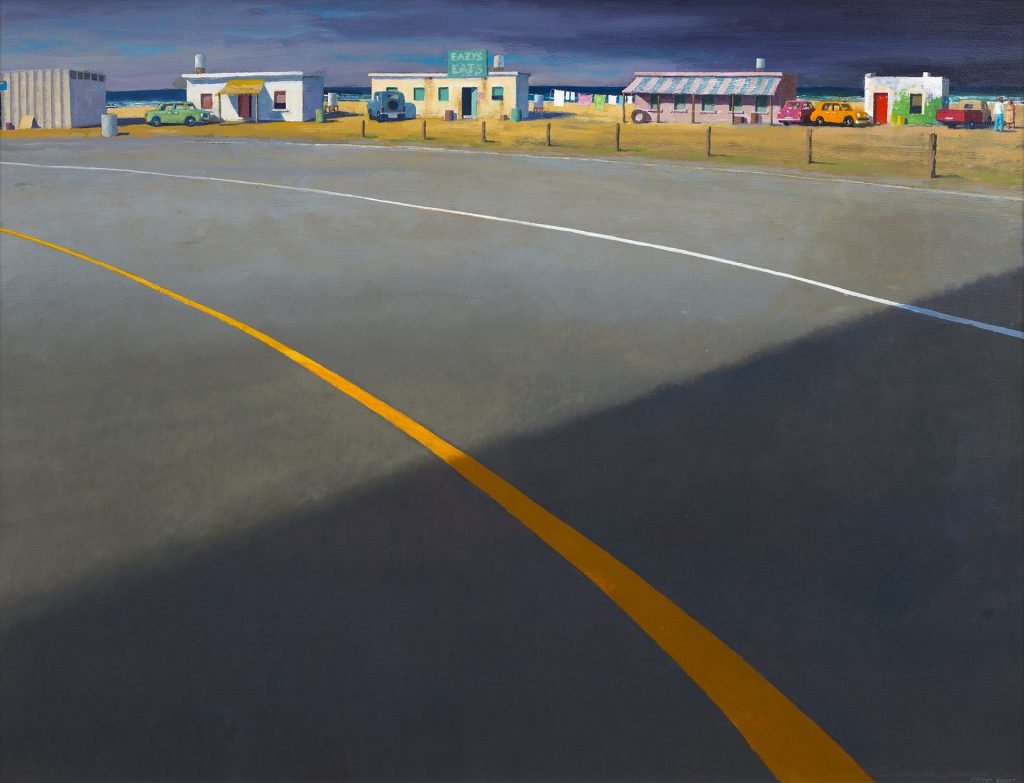 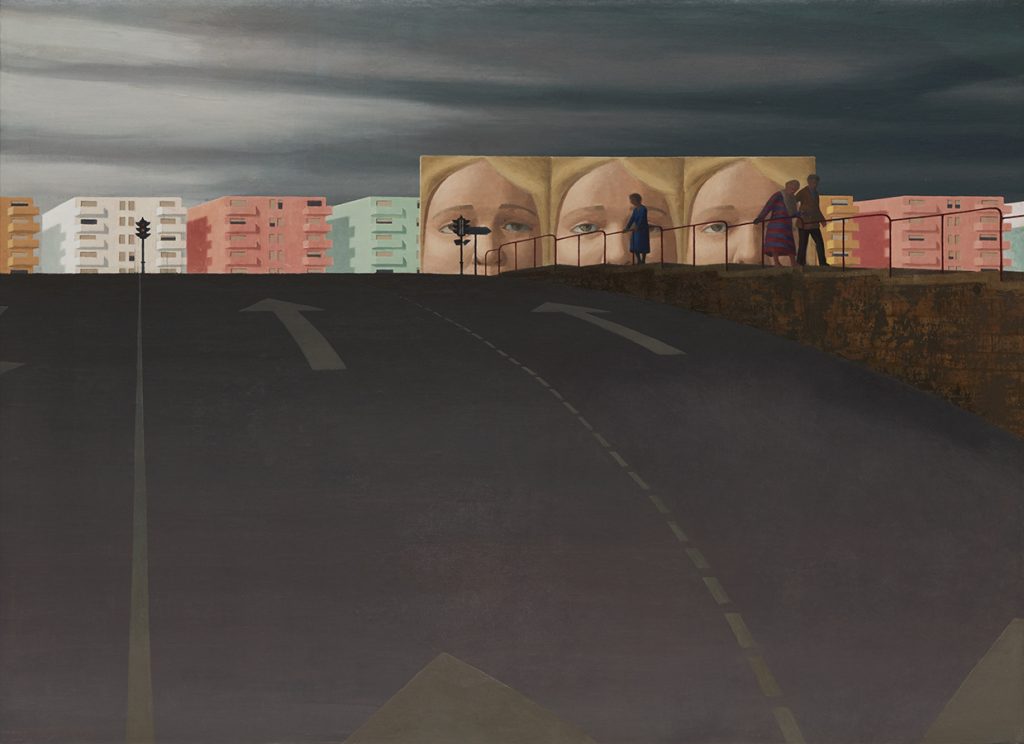 signed lower left, inscribed with title verso and labelled with loan sticker from the 2021-2022 Jeffrey Smart Centenary Exhibition at the National Gallery of Australia